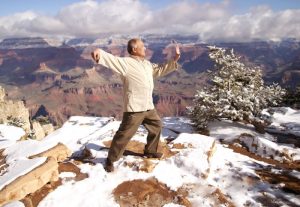 Knowing the philosophy and history behind the art of Tai Chi is essential for developing a deep practice.  There is common misconception that the name Tai Chi (taiji) is referring to the same subject as the word Qi (Chi).  The first part of the art name Tai Chi Ch’uan, “Tai Chi,” translates as supreme ultimate.  Tai Chi is that which creates yin and yang from Wu Ji.  Wu Ji being, ultimateless or nothingness.  From Wu Ji through Tai Chi springs Yin and Yang.  Yin and Yang in their various balances are the forces that create the tangible universe.  Everything and every action can be seen through the lense of the complex interactions of Yin and Yang.

The final component is the word Ch’uan (quan).  This translates as fist, or in this context, boxing.

Another piece of the puzzle, the word Qi.  This term means “Term used to describe all types of energy.  Vital force behind all things in the universe, it is the medium between and within all material substances.”

Now, let’s clarify this so our heads can stop spinning.

The practice of Tai Chi Ch’uan is the art of Supreme Ultimate Boxing.  This is not an example of ancient Chinese marketing.  Instead it is the practice of martial art which follows the principals of the universe and the balance of yin and yang.  The name of the art does not directly refer to the use of Qi.  However, Qi is used in Tai Chi where the intent is used to lead energy into ones actions, among other things.

This post is meant primarily to clarify the difference between Chi in Tai Chi and Qi in Qigong (Chi Kung).  There is much to be learn about these principles and I encourage you all to get familiar with these theory.  They will greatly enhance your Tai Chi Ch’uan form practice.

Feel free to submit any questions below.