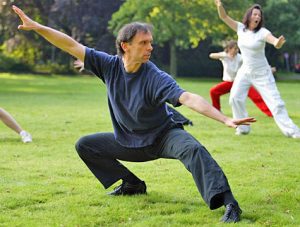 For most of us reaching our senior years means a time to retire and relax, this is the time in our lives when we start to slow down and for many it becomes a very challenging time as a number of different medical conditions such as arthritis begin to emerge. It can also mean reaching that point in our lives where we no longer have the same level of social interaction with others. This can lead to problems such as depression and loneliness that can be hard to cope with. It is also the perfect time to enroll in a class that teaches Tai Chi for seniors.

Seniors face a number of different issues as they reach retirement age and move on into their golden years. Perhaps one that gets ignored more than most is that feeling of disconnection that can come with no longer needing to get up every morning and go to work. Suddenly a person can find themselves at a loss for what to do with their time and missing the interpersonal communication that occurs in the work environment, here is where enrolling in Tai Chi for seniors can make a big difference.

Very few people seem to associate issues such as depression with seniors, but the simple fact is that the number of older citizens being diagnosed with this real mental illness has been on the rise for years. It can be the result of many things such as the feeling of loneliness that comes from leaving the workforce, facing medical conditions such as arthritis, the death of those close to them such as family and friends they have known all their lives. It can also come from having far too much time on their hands and nothing to fill it.

Studies on Tai Chi for Seniors…

Accordingly there have been a number of studies conducted on the effects of Tai Chi for seniors in helping to overcome these issues. One of the first things noted was that by becoming involved in regular Tai Chi Chuan Class, the average senior met like-minded people and from this would begin to form new friendships. The meditation training helped not only to relieve the stresses that come with aging, but teaches seniors how to focus their minds and learn to relax.

If you have reached retirement age, you will find that participating in a regular Tai Chi for seniors class can help relieve the symptoms of depression by creating a new circle of friends and keeping you not only physically active, but more importantly mentally and socially active, two of the most important ingredients in helping you to avoid the depression that so many seniors live with every day of what are supposed to be their golden years.